Hold on a second. Have things completely turned around already? Have the planets realigned themselves and Quiksilver is again the rightful leader of the surf world? Whatever has happened, extremely savvy marketing initiative or not, we love seeing our work on airplanes and this double-sided beauty goes out to Mr. Todd Glaser. Todd photographed Julian during a recent shoot in Nicaragua for Julian's, Irons Brother's Productions, film called Scratching the Surface. Fasten your seat belts and get those trays stowed boys it's going to be a wild ride. Click here to read more. 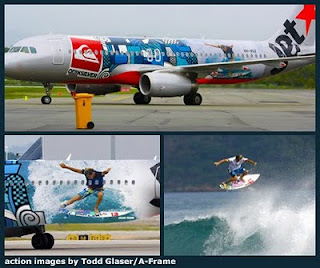 Posted by A-Frame Photography at 10:22 AM