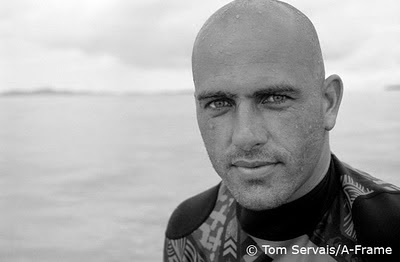 Looking into the eyes of a champ
– By Matt Walker

9250 points. You’d think it would be enough of a lead to guarantee a record 10th world title. But not quite yet. Nevertheless, Kelly Slater’s commanding victories at the Hurley Lowers Pro and Rip Curl Portugal event this fall – his fourth win at Lowers over the past 20 years; his first Portugal victory to date – certainly cements his title as the best surfer ever. And it comes at a time when the definition of what makes a champ is changing before our very eyes, largely at the hands of Slater himself.

The new format? His. (Not only did he draw it up, he flexed his political muscle to make it happen.) The move toward riding unorthodox equipment? His. (Dane may get more attention for riding Rob’s leftovers and raiding dumpsters, but Kelly gets credit for winning on a 5’9” of his own design.) And of course, the competition is still his, best demonstrated in Europe, as both those who would be champions (Jordy Smith) and once were (Mick Fanning) missed opportunities to fulfill their destinies. While Fanning kept Slater from taking three in a row by taking the Quik Pro France, he failed to stop his momentum. Come Portugal, Kelly plowed past Mick – and over Smith – the only two surfers who still have a shot at the title. And now it’s an outside chance at best.

Of course none of these less quantifiable achievements keeps pundits from asking that most annoying of questions yet again: “Can he win 10?” Nor does it keep Slater from – as usual -- answering with out really answering: “I never would have fathomed a ninth title,” he said from the podium at Lowers.” I don't know what to say. It’s a long road ahead.” But that doesn’t mean the past three events didn’t offer some real insights to ponder. Here’s just a few:

1. Kelly’s won 44 times. Tom Curren’s second at 34. Think about that. Just a few years ago, Kelly had stalled just one shy of breaking Tom Curren’s record — unable to win heats, much less titles, suffering a rare spell of contest dyslexia. But since breaking that that curse in 2007, he’s averaged more than three victories a year. Portugal makes three for 2010. Does anyone really think he can’t ratchet up 45? 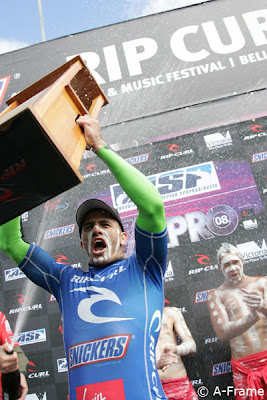 2. Kelly is only competing against himself at this point. Irons’ win at the Billabong Pro Tahiti Pro did nothing for his own chances at a fourth world title, but a rejuvenated AI could’ve been a real spoiler for Kelly. On the other hand, by making the semis in California and winning in France, Mick showed he was a real threat to steal the title in the closing events. Both are the only surfers to ever truly challenge Slates in the new millennium. And by bowing out early, both put the steering wheel firmly in Kelly’s hands – and give his former foe some extra confidence as they head to the Caribbean. 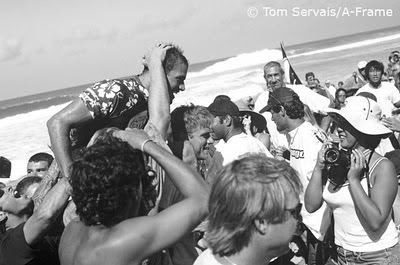 Kelly usually stays close to the lip
except on occasions like this where he takes to the shoulder
3. Kelly has three times the reason to win in PR. Whether it’s beating a new school of surfers or breaking personal records, all Kelly needs to win is a reason to push himself. But it doesn’t have to be smashing an old foe. Could simply be a fresh win in a place he’d always done poorly-- like Portugal, where his best prior result before was paltry 17th. Now consider this: the Rip Curl Search event in Puerto Rico isn’t just the first ASP world tour event ever in the Caribbean, it’s the closest to an East Coast event for the Florida native. Add that elusive tenth, and he’ll be triply motivated to make history – for the world and himself. PR Preview

4. If Slater doesn’t stay first, he may never be tenth. In years past, Kelly’s often done better coming into the closing year in something other than first, winning more titles at Pipe by coming from behind. Should he fail to clamp his 10th before Hawaii, he may wish he’d stayed number 2 and slipstreamed his way into victory. 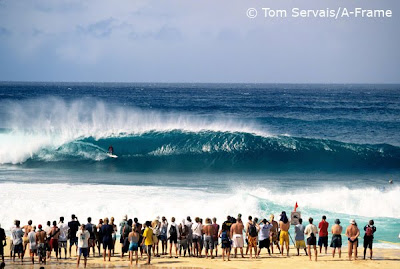 No come from behind title at Pipe this year...

5. If Slater doesn’t get tenth this year, he may never do it. The irony of the new format is Kelly could go from world champ to another world slogger fighting to re-qualify in less than a year. The good news? That added pressure and rotating numbers doesn’t just make winning contests and titles harder — it makes doing it year after year almost impossible. And if nobody else will ever topple his records, why should he? 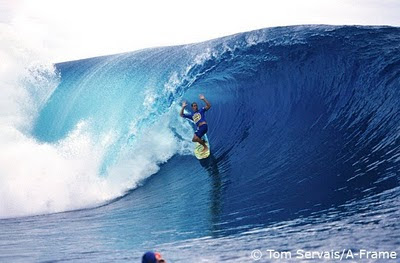 Will Kelly soon be holding up 10 fingers in Puerto Rico?
Posted by A-Frame Photography at 10:56 AM